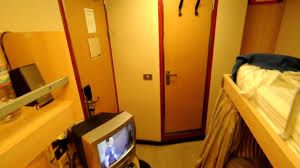 Working on a cruise ship isn’t easy. You’re on the clock up to 14 hours a day, every day, for six months to a year, with few—if any—days off, all the while being whipped mercilessly by cat o’ nine tails. Fortunately, you can have all the banana nut bread you want, so the whippings are definitely worth it.

The secret to thriving in such a demanding environment is getting plenty of rest. And the secret to getting plenty of rest in a crew cabin is to die in your sleep. Because, dying in your sleep is the only way you’ll sleep for eight hours straight on a ship without being wakened by your door-slamming, belt-buckle-jangling, peeing-with-the bathroom-door-open, playing-video-games-at-all-hours-of-the-night roommate.

If you’re young and healthy like the majority of crew members, dying in your sleep might pose a bit of a challenge. No problem. Just snore your butt off and sooner or later your roommate will kill you in your sleep. Every crew bunk comes with two pillows: one for sleeping on and the other for smothering your snoring roommate.

Although sharing a tiny cabin with a complete stranger is the greatest suffering I’ve ever had to endure for my art, some crew members don’t mind at all. These are usually young people just starting their careers who aren’t bothered by noise or lack of privacy. These kids are the worst roommates you can get: because nothing bothers them, they assume nothing will bother you. These are the roommates who’ll crank the TV up to full volume at three in the morning or make long distance phone calls in staccato Spanish while standing right next to your head or decide to use their hair dryer to blow dry their laundry just as you’re falling asleep because they forgot to leave the crew bar in time to snag an open dryer in the crew laundry room.

You generally don’t get to choose your roommate. That’s the job of the crew staff administrator, who puts a lot of thought into cabin assignments by throwing darts at a dartboard.  The good news is, if you wind up bunking with someone you can’t stand, she’ll let you borrow one of her darts.

All double occupancy crew cabins feature bunk beds. Each bunk comes with a reading light, a little book shelf and a wraparound curtain that’ll provide you with complete privacy whenever your 20-year-old roommate—always the ship’s apprentice deejay—decides to throw an after-party with a half- dozen drunken friends at 4:00am after the disco closes.

The first rule of cabin etiquette is the new guy gets the top bunk. You’ll usually have to wait several months for your roommate to move out before you can take the bottom bunk, in which case you’ll want to mark your territory for your new roommate by conspicuously placing personal belongings on your bunk such as your laptop or barbed wire.

Another pain in the butt is we have to store our luggage in our cabins. If I’m lucky, I’ll get a cabin with a big spacious corner ( two feet by four feet), where there’s plenty of room for me to stack my suitcase on top of my roommate’s 10 suitcases. If I get a small cabin (six feet by eight feet), however, I’ll wind up spending 10 months with my suitcase sitting smack dab in the middle of the cabin, tripping over it in the middle of the night when I get out of bed to pee. Remember that old American Tourister TV commercial from the '70s in which the gorilla threw a suitcase around his cage? He was just pissed he wasn't allowed to put it in storage. (Even though that ape's cage was larger than the typical crew cabin!)

Except for your pillow. That’s one deadly weapon you can leave right out in the open.