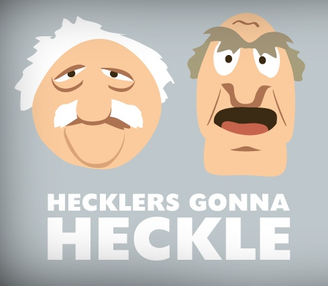 Repeat after me: Heckling does not help a stand-up comedy show!

To get an idea of how unhelpful hecklers are, imagine if you were forced to read the above sentence while trying to read something else for pleasure. Let’s say, a Dan Brown novel:

“That’s it,” thought Langdon. “The answer was right in front of me the whole time. If one translates Beowulf from the old English into Portuguese using a code key hidden in the original handwritten lyrics of Francis Scott Keyes’ ‘Star Spangled Banner’, then the name ‘Grendel’ changes to ‘Dick Cheney’, which means the murderer has to be…” –Repeat after me: Heckling does not help a comedy show!

See how frustrating that was? Just before you could confirm your hunch that George W. Bush is the scion of Jesus of Nazareth, hell bent on destroying the Catholic Church so that he can paint over Michelangelo’s  work on the Sistine Chapel with a giant portrait of himself dodging a flying shoe thrown at him by a rogue Iraqi assassin as revenge for the time he tried stealing the original Declaration of Independence as an initiation prank for the Skull and Bones Society in an attempt to uncover the conspiracy to murder General Patton, who was actually a high-ranking secret member of the Free Masons, the Druids and the Illuminati—I had to go and ruin it by thinking that what I have to say is more important or entertaining than the carefully written and edited prose of the bestselling author you paid good money to read during your valuable free time.

Why? Because I’m disrespectful and self-centered. And a member of the Illuminati.

Although the average headliner can make crushing a drunken redneck under an avalanche of well-rehearsed stock lines look easy and fun, as well as therapeutic, comedians don’t need hecklers to help them get laughs.

That’s what jokes are for. Jokes: you know, those things comedians write and perform every day for a minimum of five years before becoming a paid professional?

Hecklers always think they’re helping the show. Sometimes, they even feel as if they are the show. Unfortunately, hecklers want to be part of the show without putting in any of the hard work required to prepare, produce or promote the show. Most hecklers are so egotistical they actually think that the interplay between themselves and the comedian is somehow superior to the material the comedian has spent the past decade or so honing.

I don’t spend hours at the computer perfecting a piece of material just so an audience member who shows up five minutes late to a show can interrupt me and force me to make fun of the lime-green tank top he’s wearing on Formal Night just so he can feel like a superstar for the rest of the cruise every time somebody yells, “Hey, look it’s ‘Lime-Green Tank Top Boy’!”

We comics don’t slam hecklers in order to get laughs; we slam hecklers in order to embarrass them into silence so we can get on with our acts. Problem is most hecklers have a simplistic sense of humor. So, when a comedian whips up a witty comeback right off the top of his head, what most comics would consider a run-of-the-mill heckler slam comes across as pure comedy gold to the heckler. Therefore, the heckler reasons that in order for a comedian to drop the boring crap and start with the real jokes you have to heckle—or help—him. This reasoning is illogical because it totally ignores the opinions and preferences of the other three hundred people who paid to see the show. Without having any affiliation with the comedy club other than clipping a free coupon out of the newspaper, the average heckler decides that he knows what’s best for both the comedian onstage and the rest of the audience. The product of a perfect blend of narcissism and Long Island Iced Tea.

If heckling is so integral to an act's success, then why don’t comedy clubs audition hecklers and book them six months in advance just like comedians? When was the last time you walked into an Improv or a Funny Bone and saw a poster that advertised: “Tonight: Marc Maron! With special guest: ‘Some drunken redneck in a Nickelback T-shirt’ ”?

Once a heckler opens his mouth, the show's focus transfers from the performer onstage to a member of the audience who may or may not have paid to be there. Most people who pay to see a comedy show do so because they’re either a fan of stand-up comedy in general or a fan of a specific comedian:

“Jim Gaffigan is coming to the Civic Theater next month. I love that guy—let’s go online and buy tickets... (so we can sit in the front row and shout, ‘Hot Pockets’ every five seconds until Jim throws the microphone at us before running offstage to put his head in a microwave oven).”

Nobody who buys a ticket to a comedy show is paying to see the audience:

“Gee, I hope that same drunken redneck in the Nickelback T-shirt who heckled Brian Regan at the Hard Rock Casino last month shows up at the Jim Gaffigan show tonight. His non-sequiturs about Bud Light and bass fishing were way funnier than anything two of the best joke writers in North America who make millions in ticket sales every year have to say. Better yet, I hope there’s a loudmouthed bachelorette party sitting front row center. I pray that, as soon as Jim launches into a hilarious bit about how much money he spends on groceries every month feeding a family of six, some barely coherent bachelorette does one too many shots of tequila and tells Jim straight up how unfunny he his. That way he can abandon the material he’s spent the past year perfecting in order to make some hysterical, off-the-cuff comparisons between plantains and the giant penis hat that demure flower is wearing.