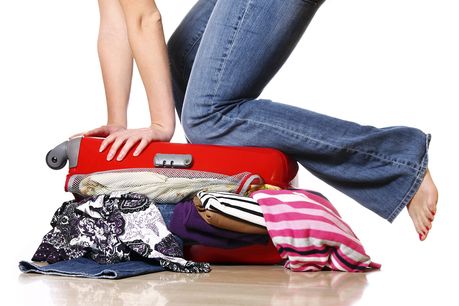 It’s great to be back home in Cleveland. This is the first time I’ve seen snow in seven years. Unless you count the time I picked up the wrong suitcase in Mexico.

I’d have preferred to remain in the Caribbean for the winter, but I was arrested for throwing eggs at the ship next door and drag racing on a Rascal Scooter (the Lamborghini of mobility scooters). They were going to deport me to Canada, but they found out Cleveland was colder due to the “lake effect," which is meteorological jargon for “freezing my nads off."

Although six months is a relatively short contract for me, I couldn’t wait to pack my bags because the only thing more fun than living on a cruise ship for six months is figuring out how to get all my accumulated crap into one checked bag and one carry-on. It’d be easier to get Chris Christie into a Speedo.

After spending half my life traveling for a living, I have packing down to a science. Unfortunately, science was always my worst subject. But, according to Wikipedia, the first law of luggage-ology is: “Objects at rest will weigh precisely one pound over the airline’s fifty pound limit once you get to the airport.” It doesn’t matter if the only things you pack are a jock strap and a duck call, once you get to the airport your suitcase will weigh exactly fifty-one pounds, in which case you’ll be expected to pay a $100 overweight luggage fee. (Unless the airline associate feels sorry for you, in which case she’ll only charge you $125.)

Actually, it’s not that hard to pack a suitcase correctly after half a year at sea. All you have to do is follow five simple steps:

1.  Create a packing list: Make a list of everything you need to pack into the suitcase.  Leave nonessential items at the bottom of the list. That way, if you run out of space you can throw those items away, give them to your cabin mate or leave them in the charity box down in the Crew Internet Lounge. (Central American orphans can never get enough extension cords or Tom Clancy novels.) Thanks to OCD and my predilection to hoarding, my packing list was a breeze to make:

2.  Separate large and small items: To pack a suitcase properly you must first make room for large items like suits, sweaters or your cabin steward (making your own bed at home sucks!). Once all large items are situated small items (like a shorter cabin steward) can be fitted into the empty corners or crevices between large items and around the edge of the suitcase.  Instead of folding the big items try rolling them up. Although this won’t save any space, it'll leave you prepared should you decide to spend part of your vacation in either Colorado or Washington state.

4.  Pack socks and underwear last: Don’t pack socks and underwear with the rest of your clothes because they’ll take up too much space. And don’t wash them either. Instead, once you've packed your suitcase, slip your smelly socks and crusty underwear into the flap of the suitcase so they’ll fall out easily and put an abrupt end to any Customs or TSA inspections.

5.  Ship home non-clothing items: It’s easy for crew members to accumulate lots of books, DVDs and souvenirs such as that wooden figure of Justin Bieber riding a donkey you bought in Cozumel after one too many Coronas—stuff you won’t need as soon as you get home but don’t want to leave on the ship because where else are you going to find a wooden figure of a donkey being ridden by a jackass? Shipping this stuff home is usually less expensive than paying for an extra or overweight suitcase. (If you ship your cabin steward make sure to leave a snack in the box.)

Well, that’s all the time I have for now. I’ve been home for a whole week now and I should probably get unpacked.