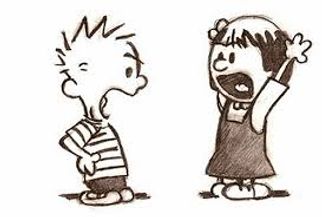 I’m engaged to a beautiful and intelligent Croatian woman with whom I argue a lot. When people ask us how we met, we tell them it was love at first fight.

And, boy, how we fight. If we lived in Israel, Israelis and Palestinians alike would be knocking on our door, shouting, “Give it a rest already!”

Our latest fight was particularly bad. But, like most of our fights, I have no idea what it was about or how it got started. All I know is Chris Brown called me the next day and said, “N****, you better apologize.”

Most people are too quick to break up with somebody just because the relationship gets a little rocky:

“I can’t believe you just buried an ax in my head! I want a divorce!”

“Oh, stop being so dramatic—we've got health insurance! How about a little makeup sex?!”

“Not tonight—I’ve got a headache!”

Relationships aren’t meant to make you happy; they’re meant to give you somebody to be unhappy with:

“Sure, as long as it’s not some stupid rom-com with a happy ending.”

Happiness is your own responsibility. If you can’t be happy by yourself, stop thinking you can be happy with somebody else:

“I’m fat, I’m stupid and I’m unattractive. But if I were in a relationship, then I would be happy.

“Because then the only thing missing in my life would the nagging suspicion that my significant other is cheating on me with somebody thinner, smarter and more attractive.

“So if I could replace my insecurity and self-loathing with a constant fear of betrayal and abandonment —then, I would be happy.”

Companionship is its own reward. I don’t expect Željka to make me happy; I expect her to make me a sandwich. And Željka doesn’t expect me to make her happy; she expects me to make the bed. Her cooking for me shows she loves me and my doing little chores for her shows I love her. All that the constant fighting shows is that we better not break up, because nobody else would put up with us.

Many men make the mistake of thinking that if his wife or girlfriend is constantly busting his nuggets, she’s the wrong woman for him. Guys, you shouldn't worry about your woman busting your nuggets, because busting your nuggets is the number one sign that she really loves you. What you should be worried about is the woman who never busts your nuggets, who never gets angry, who never loses her temper. Show me a woman who doesn’t do everything she can to make you miserable when you’re awake and I’ll show you a woman who’ll murder you when you’re asleep.

But one thing that doesn’t help you become a better person is bailing on a relationship just because the other person is a gigantic pain in the butt. That’s why I’ve never understood divorce. Ask any married man if he would take a bullet for his wife and he’ll say Yes without hesitation. But as soon as his wife becomes a certified nugget busting machine, he’ll start chasing anything in a skirt. So let me get this straight: You’re willing to take a bullet for your woman but you’re not willing to take forty to fifty years of incessant bickering, quarreling, squabbling, yelling, screaming and standing half-naked on the front lawn at 4:00am, putting your personal belongings out with a fire extinguisher?

You’re the one who bought the engagement ring. You’re the one who proposed. You’re the one who said “I do”—until death do you part. So don’t abandon the ship now just because the seas are a little stormy. It’s not love unless the neighbors call 911 and you wind up on “Cops,” being pushed into the back of a squad car in your boxer shorts and wife-beater T-shirt while she stands on the porch of the double-wide, sobbing, “He’s a good man, officer—he didn't mean me to bury that ax in my head. Don't arrest him--we got health insurance...."

Now, if you’ll excuse me, I have to go. Željka just finished reading this horse crap and I’ve got some fighting to do.

And the only thing I love more than fighting is... her.