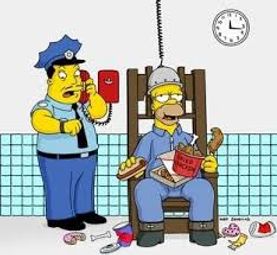 Meanwhile, Oklahoma wants to abolish lethal injection because it’s not covered by Obamacare.

Oklahoma botched an execution by lethal injection several months ago. They used the wrong chemicals so it took about an hour to kill the guy.  (In fact, while he waited, he had a new pair of glasses made at Lens Crafters.) But, although the media made a big deal out of it, I don’t think the guy they were executing really minded all that much:

"No, really, take all the time you need. I’ve got nothing planned for the rest of the day. If you want, we can break for lunch and try this again in a couple of decades…."

The kicker is that the guy never got his last meal. Apparently, he requested steak with A-1 Sauce, shrimp salad, a baked potato and dessert. But since that meal would have cost more than $15, his request was denied. Call me a bleeding heart, but if we, as a society, are going to end the life of a fellow member of society, the least we can do is send an intern over to Applebee’s for some takeout. How better to help a convicted murderer learn the error of his ways than by showing him how wonderful life can be for $8.99 on Tuesdays and Thursdays? One basket of all-you-can-eat riblets before dying and even the most cold-blooded psychopath will realize that killing is a no-no.

One thing I’ve learned is that it’s totally useless to debate the death penalty with friends who support capital punishment. No matter what you say, they always have a knee-jerk response locked and loaded:

“You know, the death penalty, both in the U.S. and around the world, is discriminatory and is used disproportionately against the poor, minorities and members of racial, ethnic and religious communities. Since humans are fallible, the risk of executing the innocent can never be eliminated.”

“Furthermore, the astronomical costs associated with putting a person on death row – including criminal investigations, lengthy trials and appeals – are leading many states to re-evaluate and re-consider having this flawed and unjust system on the books.”

“Yeah, well, I just saved a ton of money on my car insurance!”

When it comes to the death penalty, I consider myself both a conservative and a liberal: I’m for the electric chair but only if it’s solar powered.

I’m kidding. Truth be told, I’m no fan of the death penalty; because, the longer I live and work on a cruise ship, the more I want to kill somebody.

They say that the death penalty is a deterrent to murder. But if anything should be a deterrent to murder it’s plain ol’ prison. In prison, you're forced to go "number two" in the middle of a tiny cell, on that metal prison toilet, with no privacy whatsoever. I don’t care how badly you want somebody dead; all it should take to stop you from pulling the trigger is to picture yourself dropping a deuce with a big, bald Aryan ape with a dragon tattooed to his head staring you down as you nervously try to wipe. Anytime you find yourself compelled to act-out some ultra-violent adolescent, woe-is-me revenge fantasy, just dial up that bowel-tightening scenario in your noggin and you’ll immediately switch to envisioning a better tomorrow, wherein you buy the whole world a Coke and teach it to sing in perfect harmony.

“Yo, play-a! You stole my cocaine, you burned down my drug lab, and you blew up my Escalade!” I should kill you, but I don’t want Al Sharpton to be disappointed in me when they fry me like a catfish at the church social!””

“Hey, boy! You stole my moonshine, you burned down my still, and you blew up my El Camino! I should kill you, but I don’t want Nancy Grace to say mean stuff about me after they fry me like a funnel cake at the state fair!”

While we’re at it, let’s piss off some Hispanic-Americans:

“Yo, Holmes! You stole my Chiclets, you burned down my taco stand and you blew up my donkey! I should kill you, but I don’t want George Lopez to make bad jokes about me after they fry me like a churro at a flea market!”

And let’s not forget Gay-Americans:

The reason why I think capital punishment doesn’t deter murder is that murder doesn’t seem to deter crappy human behavior. The world is filled with hair-triggered psychopaths who could kill us in a blink of an eye, yet we continue to flip off others in traffic, steal parking spots at the mall, cut in line at the supermarket, talk and text in movie theaters, stiff waiters, cheat on lovers, and angrily tell panhandlers to “get a job!”

“Excuse me, brother, can you spare some change for something to eat?”

“Careful—I could have a gun.”

Can you imagine how cool it would be if people stopped treating others like crap just because they were afraid to be murdered?

“Harold, I can’t believe you just tipped our waiter twenty percent for a change.”

“Beats getting stabbed in the neck with a fork, sweetheart.”

“Oh, come now, Harold. That nice young man would never do something like that. Who wants to spend the rest of his life pooping on a prison toilet?"